Did you know it’s chocolate cupcake day? I didn’t either! Until I googled it, of course. I’ve been wanting to share these cupcakes with you all, but needed a special occasion. Here it is. The made-up holiday of “Chocolate Cupcake Day”. There are some interesting holidays out there. November 15th is “Clean Out Your Refrigerator” day. Geez. It should just be November 15th every day. So here’s me celebrating one of my favorite things – chocolate. 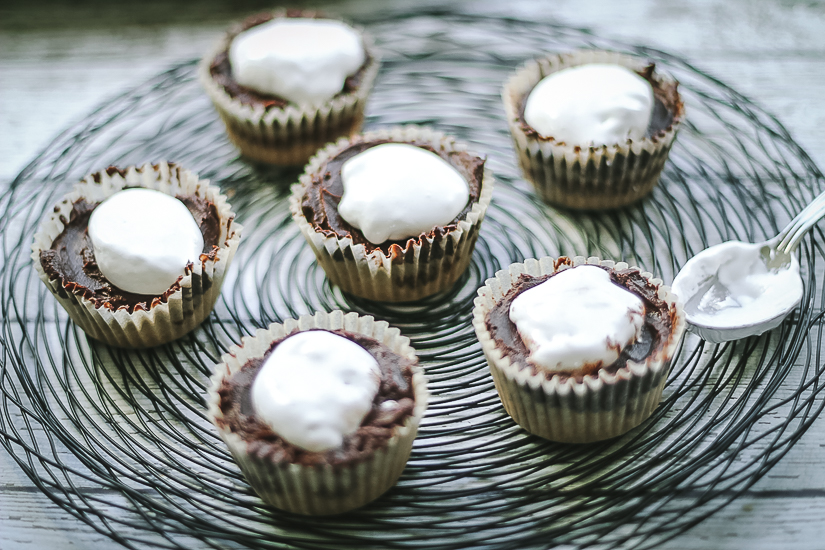 This is for the kid in everyone – S’mores in a cupcake. Lots of people have memories of cooking S’mores on a campfire, but my favorite memory is when my kids were in elementary school and my uncle invited my sister’s and my family over and the kids roasted marshmallows on this huge fire pit he had. We had 7 kids running around on Uncle Pete’s property, playing games, petting the goats, and building the perfect s’more. 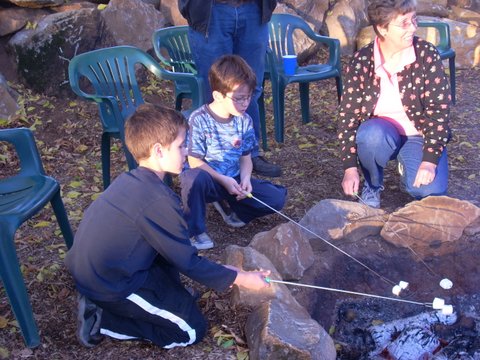 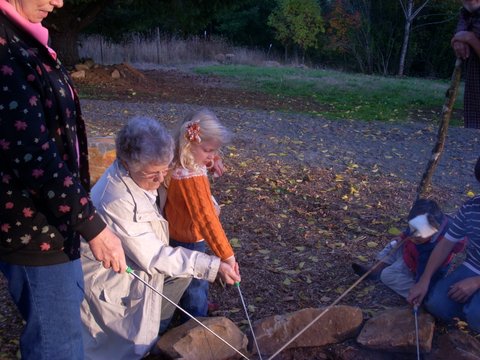 Here are some of the cousins roasting marshmallows at Uncle Pete’s house. This was probably around October 2008. We had so much fun getting together with my Uncle and Aunt and the kids have great memories of hanging out there. 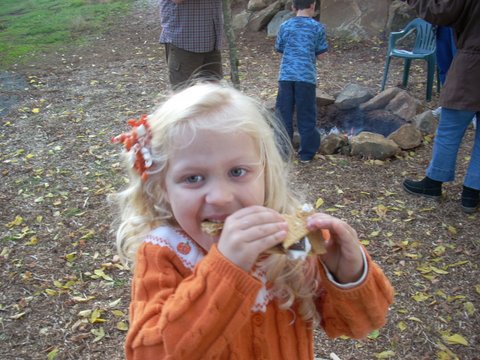 More fun eating and playing in the leaves. My daughter (now 13) is mortified that I dressed her in appropriate pumpkin picking attire. I’m still in support of dressing small children in seasonal clothing. 🙂

Now, on to the most important part – the recipe 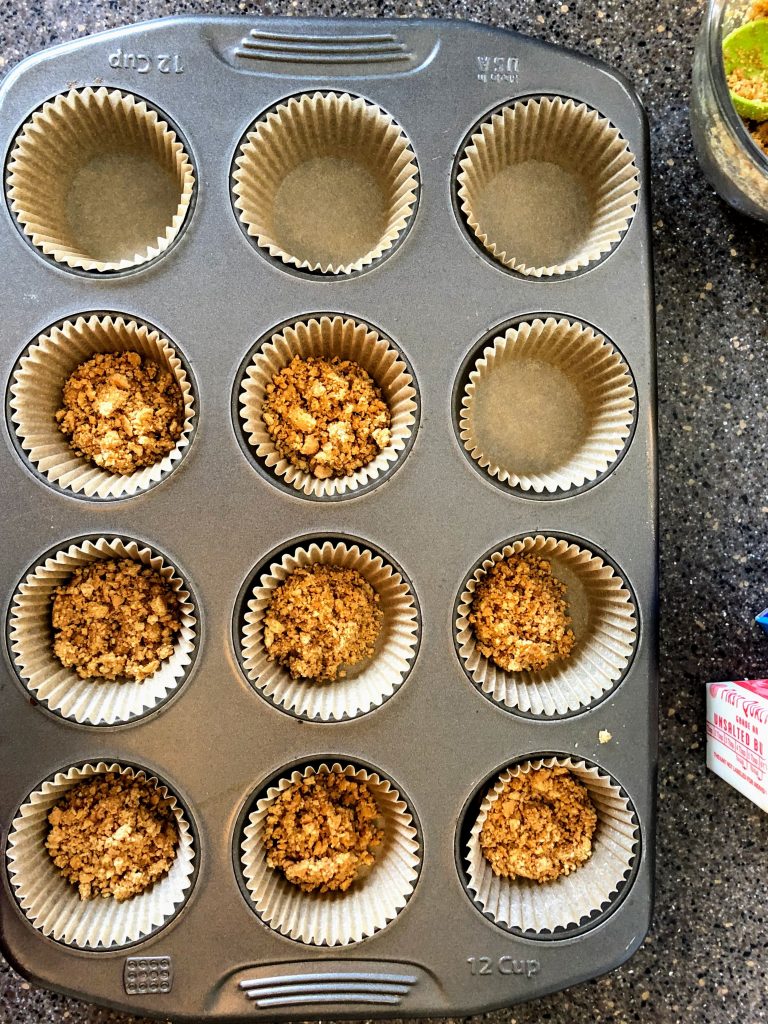 Start out with a layer of graham cracker crumbs pressed into the bottom of the liners. Baking these prior to adding the filling ensures that the crust is cooked enough without burning the cupcake. It’s not shown here, but make sure you press the crumb firmly in the bottom of the muffin well. You want it to be firm enough to hold the cupcake. The recipe makes more than 12 cupcakes, so feel free to start another pan. Or – you can do what I did and munch on the crumbs while baking. Benefits to being the baker: tasting the recipes. 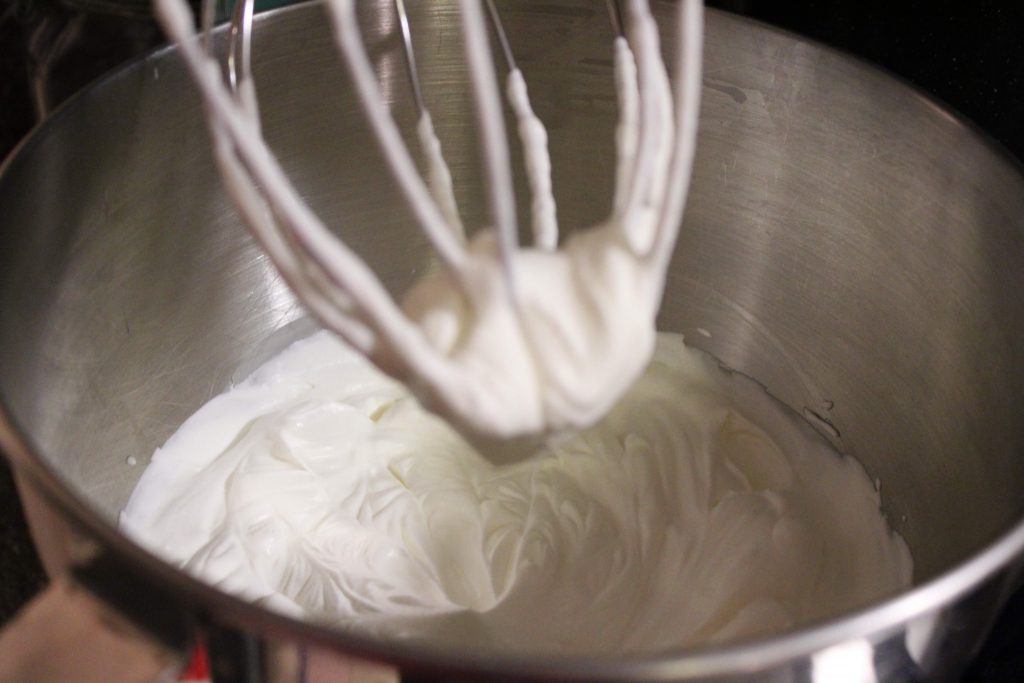 You can either spread the frosting on with an offset spatula, or use a pastry bag and wide tip and pipe it on. 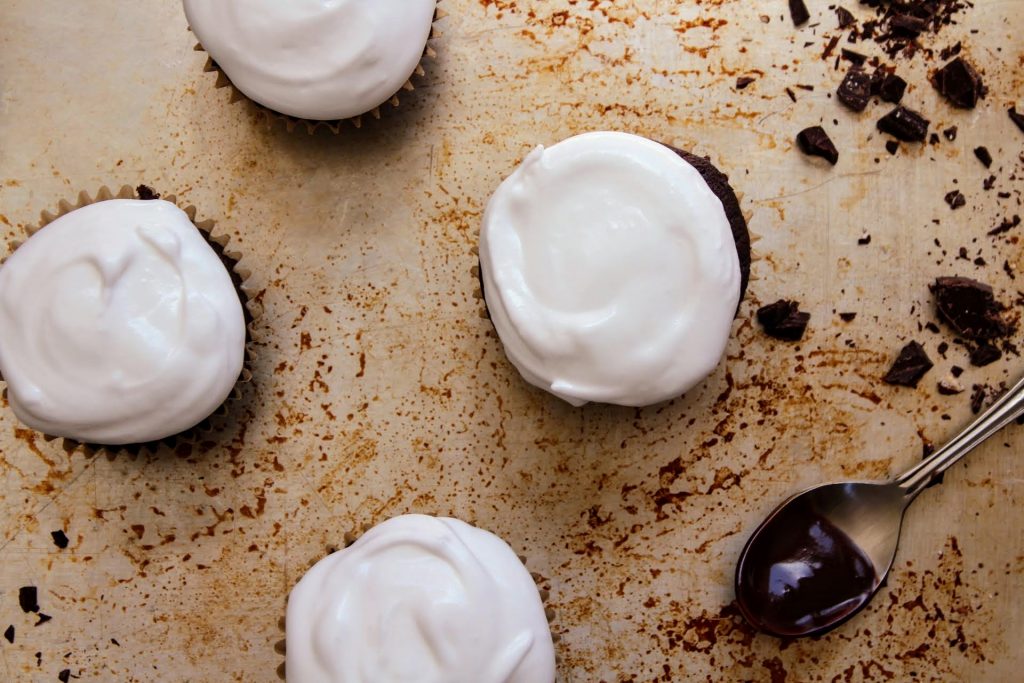 Made ahead without the filling, you can store at room temp for a day; freeze if you plan to use them later. When ready to use, thaw, scoop out a bit of the cupcake and fill with ganache and top with frosting. 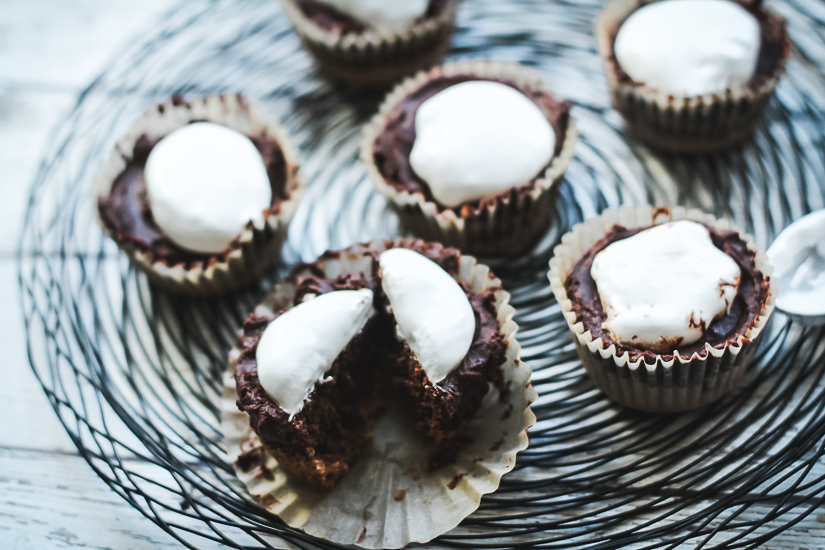 Couple of notes before you bake. I ended up making these twice before posting two see which method I preferred. The first time I scooped part of the cupcake out and filled it in with ganache. And while this is a clever idea, it’s not very practical (and let’s be honest – not enough chocolate for me!). So the second time around, I simply spread the ganache on top of the cooled cupcakes, let that set, and then spread the marshmallow topping on. I did cheat the second time and use the fluff in a can and have to say, don’t do what I did! It’s much better making the marshmallow frosting. Even though this seems like too much work, I can honestly say that it was much better with the homemade marshmallow frosting. You can skimp if you want and use store-bought. But don’t come cryin’ to me when your cupcakes aren’t all that and a bag of chips.

To make the crust: preheat oven to 350 degrees and line a 12 cup cupcake pan with greaseproof liners. Process the graham crackers in the bowl of a food processor until fine crumbs. Add melted butter and sugar,and stir until coated. Scoop one tablespoon of the mixture into the liners and press down until firmly packed. Bake until crust is just starting to pull away from the sides of the liners, about 7 minutes. Transfer pan to wire rack to cool completely.

To make the cupcakes: in a medium bowl whisk the flour, cocoa powder, baking powder, baking soda, and salt. In a small bowl or measuring cup, stir vanilla into buttermilk.

In the bowl of a stand mixer fitted with a paddle attachment, beat the butter and both sugars, on medium speed until light and fluffy – about 2 minutes. Reduce speed and add eggs one at a time, stopping the mixer to scrape down the sides of the bowl between each addition. Beat until creamy, 1 to 2 minutes. Add half the flour mixture and mix on low. Then add buttermilk, then remaining flour mixture. Beat until just blended after each addition.

Using a 3 tablespoon cookie scoop, fill each liner about 2/3 full and bake until the tops are just dry to the touch, about 18-20 minutes. Transfer pan to wire rack to cool completely.

To make the ganache: place chocolate in a medium bowl. In a medium, heavy saucepan, bring cream to just before a boil. Pour hot cream over chocolate and allow to sit for at least a minute. Gently stir the mixture until the chocolate melts. Stirring too much or too quickly adds unwanted air into your chocolate.

To make the marshmallow frosting: In a small stainless steel saucepan, gently stir 1/3 cup of water, the sugar, cream of tartar, and salt. Begin to heat the mixture over medium heat without stirring.

In the bowl of a stand mixer fitting with the whisk, whip the egg whites and medium high speed until soft peaks form, about 2 minutes. Turn off the mixer.

When the sugar mixture starts to show signs of bubbling, boil for 3 minutes. The mixture begins to thicken and the sugar will dissolve. Small bubbles form on the surface of the sugar – be sure NOT to stir it.

With the mixer on medium-low speed, slowly stream the hot sugar syrup into the egg whites. Increase speed to high and beat until stiff peaks form (about 7 minutes). A few seconds before you stop beating, add in the vanilla until just mixed in.

To fill and frost the cupcakes: use a sharp knife or small spoon to scoop out about 1 inch wide and 1 inch deep hole. Be careful not to cut too deep or the cupcake will have trouble holding the filling. Fill each hole with the ganache and allow to set for 5-10 minutes before frosting. For an extra special touch – place cupcakes on a rimmed baking sheet and use your broiler to lightly toast the marshmallow frosting. Keep a close eye on it – only needs about a minute. At first glance these may seem complicated, but they’re so easy to make. Just a couple steps to make a sure-to-impress cupcake.

Let me know how yours turn out and happy baking!