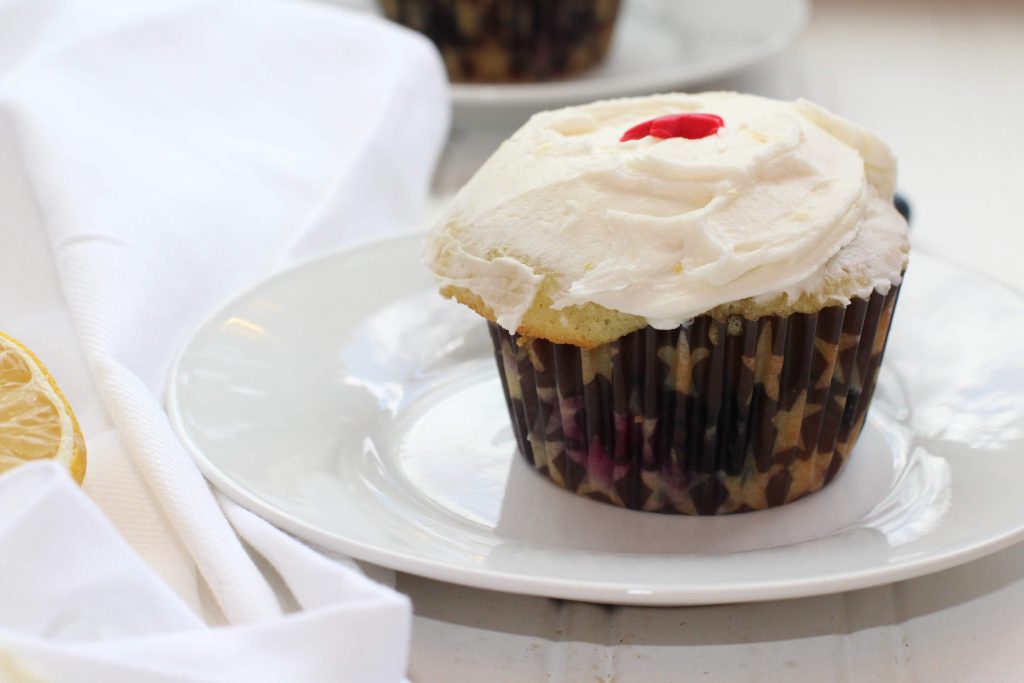 What’s the difference between a cupcake and a muffin? It’s the long debated question from my kids, whether or not they can eat a cupcake for breakfast. For some reason, it’s okay to eat a “healthy” muffin, but slap some frosting on that baby, and all of a sudden, it doesn’t seem right to eat it that early in the morning. 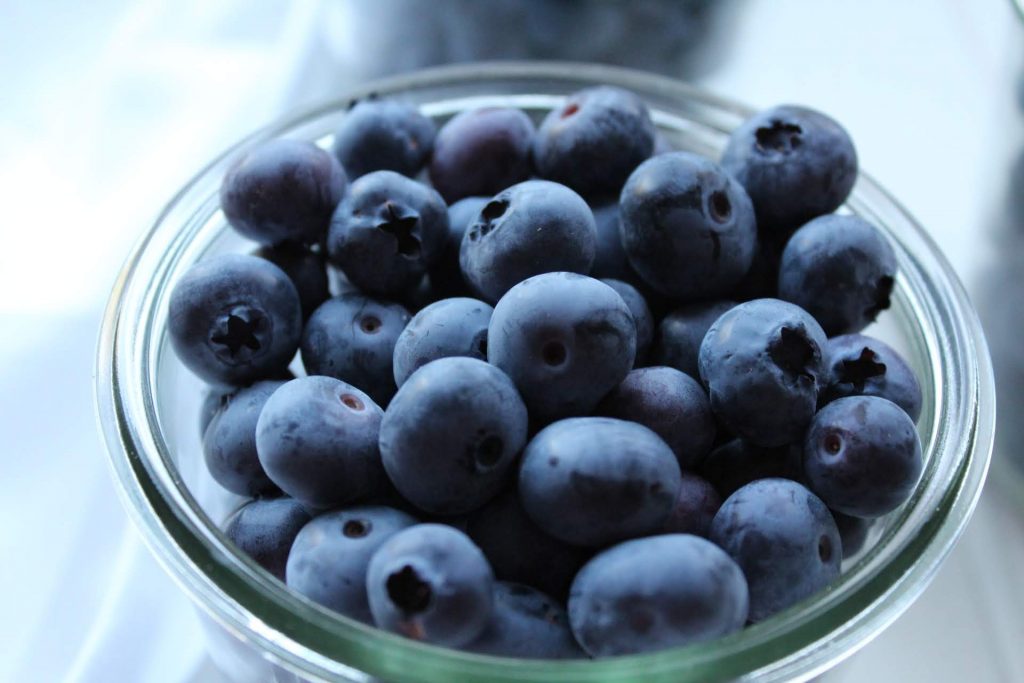 I’m fortunate enough to live in the Pacific Northwest, where there is an abundance of berries available. And these are super easy to pick – they’re right in my backyard! I have three gorgeous blueberry bushes that produce a huge crop every year. 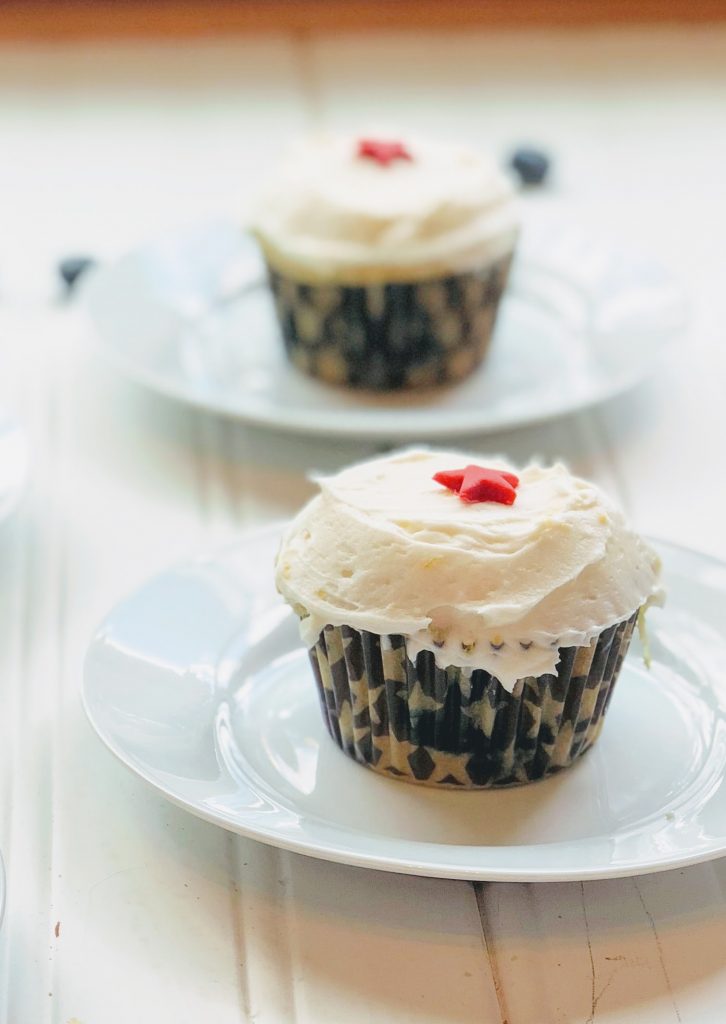 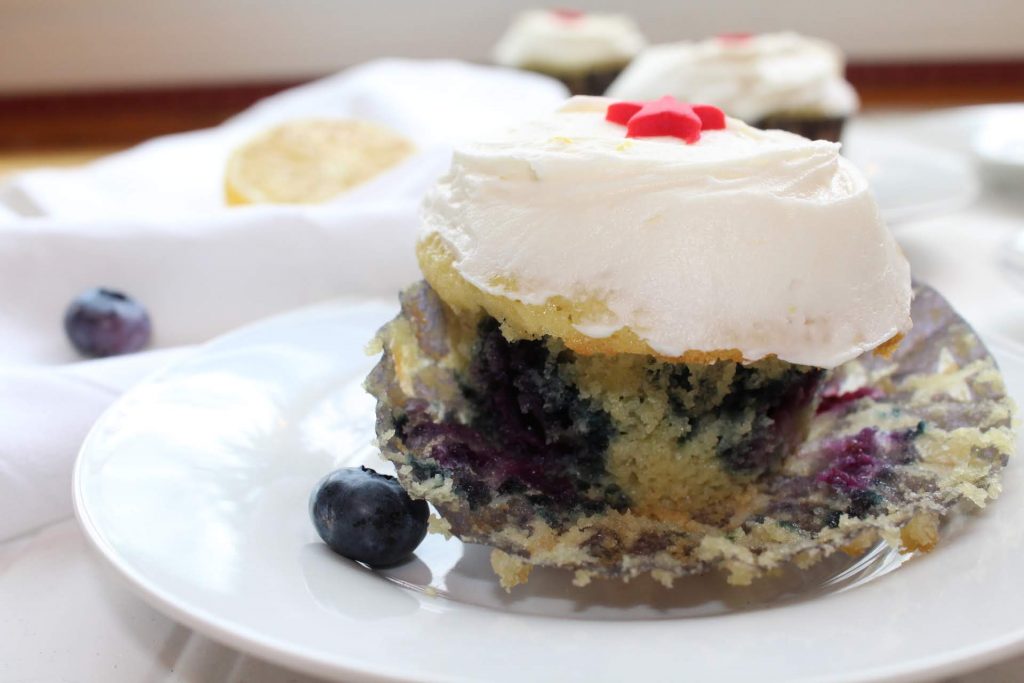 So no more debating. Go make these and have one for breakfast! Your kids will thank you.

For the lemon frosting

To make the cupcakes: Preheat oven to 350 degrees and line a muffin tin with greaseproof liners.

In a medium bowl, whisk the flour, baking powder, baking soda, and salt. In a small bowl, toss the blueberries with 1 tablespoon of flour.

In a small saucepan, heat milk and lemon zest until hot, but not boiling. Set aside to cool slightly. Stir in vanilla.

In the bowl of a stand mixer with a paddle attachment, beat the butter and sugar on medium speed until light and fluffy, 2 to 3 minutes. With mixer on low, add egg and egg whites one at a time and beat until creamy. Slowly add half the flour mixture, then milk mixture, the remaining flour. Scrape down bowl between each addition to insure flour is fully incorporated. Gently fold in blueberries with a silicone spatula.

Using a 3 tablespoon cookie scoop, fill each muffin tin. Bake at 350 for 18-20 minutes, until toothpick inserted near center comes out clean. Remove from pan and cool completely on wire rack before frosting.

To make the frosting: in the bowl of a stand mixer fitted with the paddle, beat butter and salt on medium speed until light and fluffy, about 3 minutes. Reduce speed to low and slowly add powdered sugar. Scrape down bowl and continue beating until fully incorporated. Add milk, lemon zest and juice, and vanilla, and beat on medium speed until fully blended, about 2 minutes. Mixing too long incorporates more air into the frosting. Spread on cooled cupcakes with an offset spatula or use a bag to pipe frosting on.